A few days ago while going about my daily twitter perusing, I was challenged by a friend. I cannot remember the exact wording but I do know that this was not the sort of challenge I would back down from. The miniature that was settled on was Sevatar. I’ve recently read Prince of Crows and am on a bit of a Night Lords kick at the moment so I was only too happy to use this as an excuse.

Today, I picked up the miniature while on a jaunt to Warhammer World for no reason whatsoever…

While I was chilling out over food and a beer, I realised that an impartial judge was going to be needed to inform us which would be the winner. It was suggested that we needed celebrities to do so. Using the joy that is social media, I tagged a few authors who might be interested expecting nothing in return. How wrong was I!

Gav Thorpe was the first to respond, saying that he would be happy to help. Bees followed shortly afterwards, as did Dr Dave. The last two shocked both office and myself… 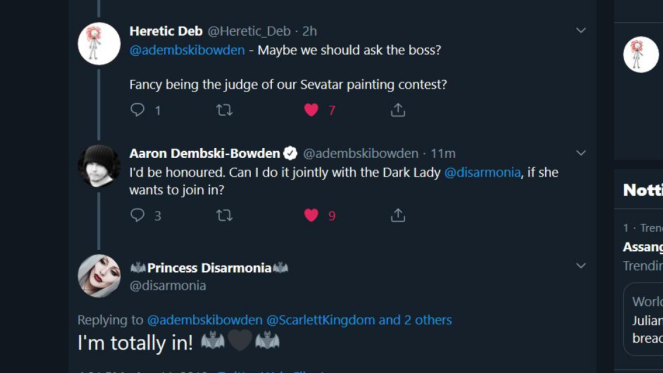 This was a surprise to both Office and myself. Neither of us expected this sort of celebrity response. After a quick natter with Office, we have decided on these details:

Battle of the Bastard!

May the best painter win!!