Today was the day! I took both Abaddon and the Brood Lord, Night Lord combo in to Games Workshop for the public voting part of Everchosen. I placed the miniatures in the store at about half 10. Voting wasn’t until 1 however, so after a chat with some pals, I went for a walk around.

When I returned, it was voting time! I wasn’t able to vote in the categories I had entered, but I was able to do so in the Young Bloods. It is always hard choosing the best, as I know the time and effort that goes into painting a miniature. Each one of the youngsters spent a great deal of both and it really showed. I did managed to get some pictures, though I am unsure how clear they are: 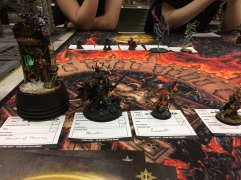 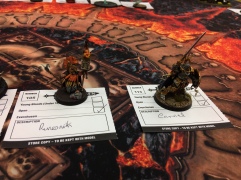 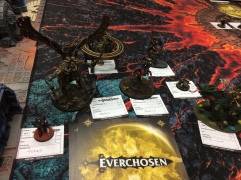 The worst part was the waiting. I hate waiting at the best of times.

When the results came in, I found I had done well. The Night Lord/Brood Lord combo came third in the Open Category, which considering it was made of miniatures I had painted about six months ago and was put together on a whim, I was really pleased with.

Abaddon in the Everchosen category, by a margin of one (1) point, came second. Something I am thrilled with. I’ve only been painting to this high a level for about a year now and it was the first time I have ever tried Non-Metallic Metals. I learned a great deal doing both miniatures and am very proud of my results. For the end to be that close as well makes me all the more pleased.

Now, I need to think about what crazy thing I am going to work on next, between the commissions I have and the Kill Team I am part way through painting!